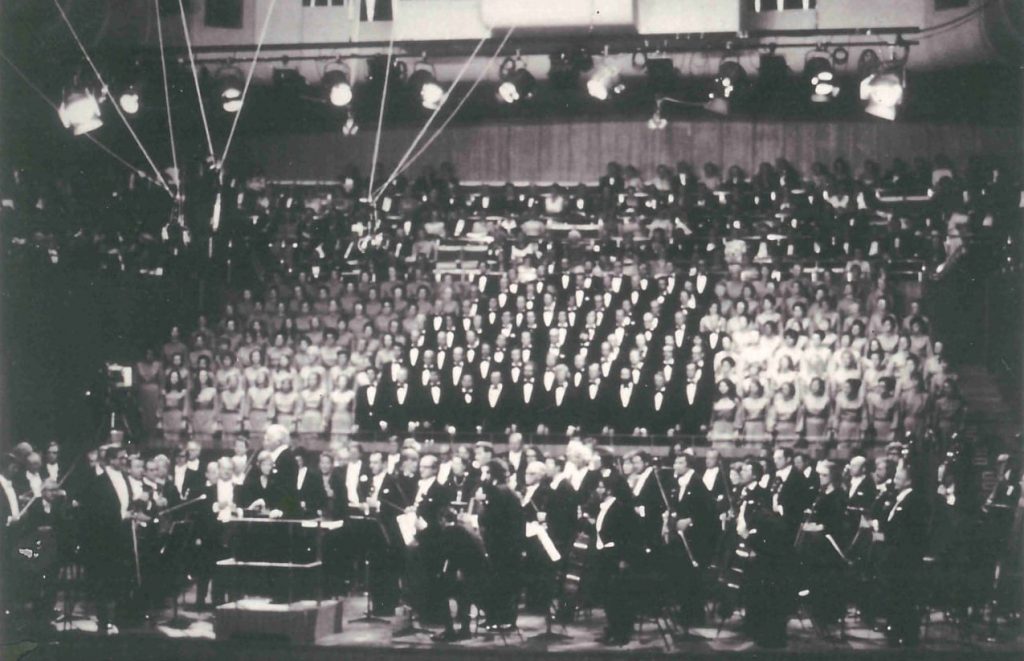 The Opening of the Sydney Opera House in 1973 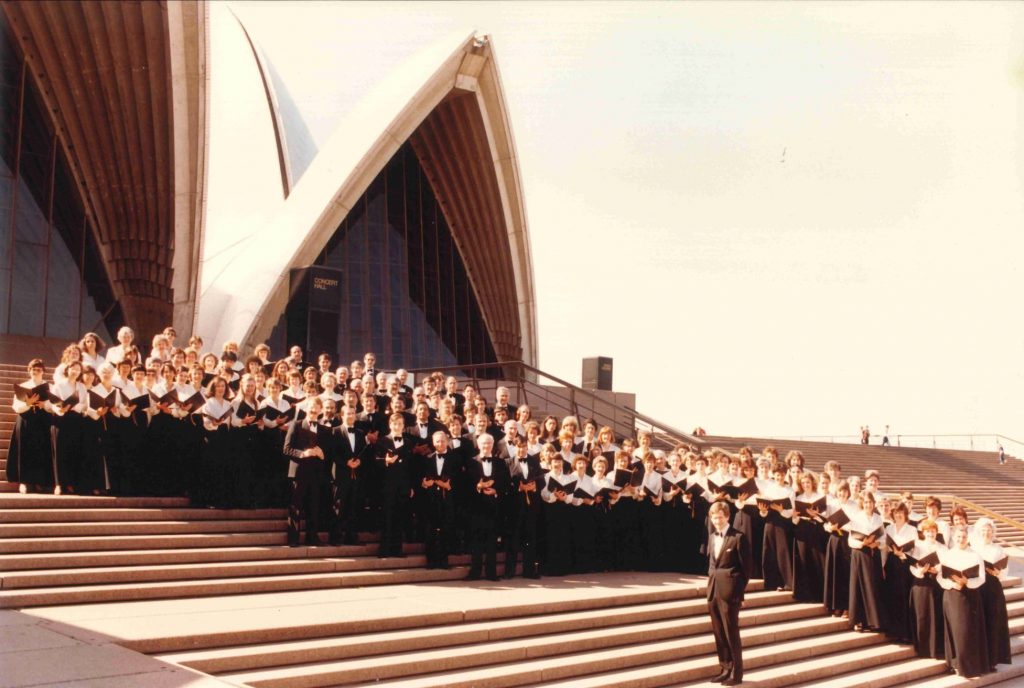 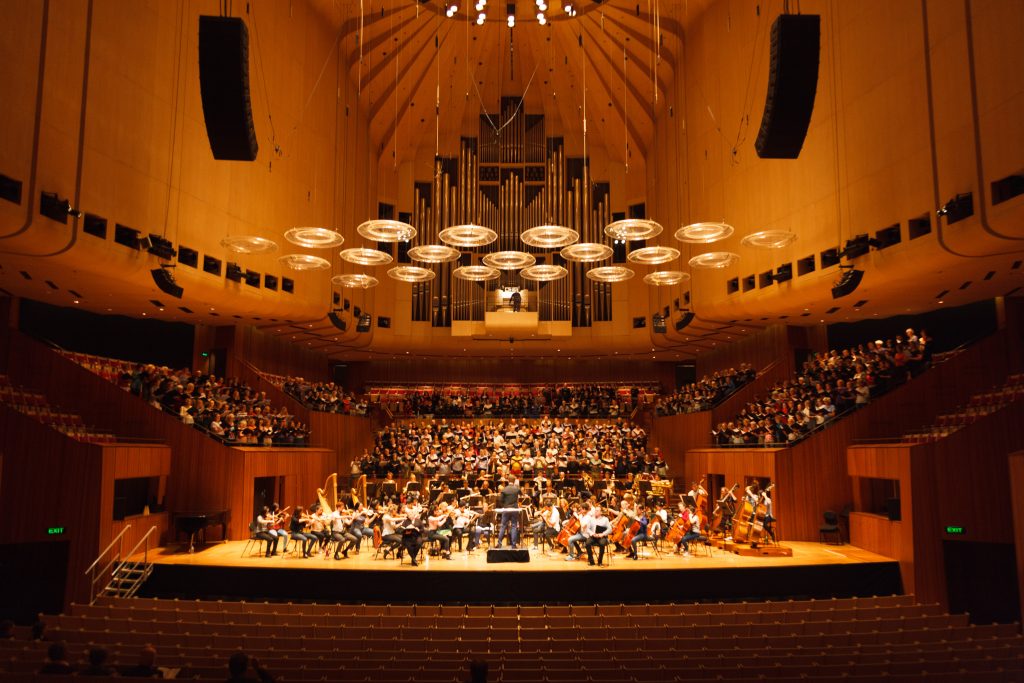 Festival Chorus and Symphony Chorus in rehearsal in 2017

A Century in Review

For more than a century, the choirs of Sydney Philharmonia have been driven by a passion to sing. From the outset, when 19 church choristers met in 1920 to form the Hurlstone Park Choral Society, amateur singers performing at a professional level have devoted their time and talent to the wealth of music in the choral repertoire. Since then, the organisation has grown in size and reputation to become one of Australia’s longest continuously active arts organisations.

The original group of choristers quickly made their mark on Sydney’s musical life, enjoying notable successes at eisteddfods and in performances with church groups and musical societies. By 1930, the membership numbered 100 and the Society had more offers of work than it could manage. The Society’s singers first appeared with the ABC Orchestra (later the Sydney Symphony Orchestra) in 1936 and in 1941 the ABC awarded them the contract as the ABC choir, beginning the enduring relationship as the choir for Sydney Symphony Orchestra concerts.

Under Musical Director Peter Seymour, the Society expanded as its reputation grew, and in 1969 was renamed the Sydney Philharmonia Society. Seymour believed the organisation should present concerts independently of the ABC, which led to the establishment of an annual subscription series in 1972. He also formed the Motet Choir, a second smaller choir now known as the Chamber Singers. A young adult choir, VOX, was formed in 2001 and has been led by Elizabeth Scott since 2008. In 2007 Music Director Brett Weymark formed the Festival Chorus to widen opportunities for choral singers in the community.

Musical highlights include a performance of Beethoven’s Choral Symphony in the presence of Her Majesty The Queen for the opening of the Sydney Opera House in 1973. Australia’s Bicentennial year, 1988, was another landmark, with the choirs playing a pivotal role in the Australia Day celebrations at the Sydney Opera House and the vast Easter Choral Celebration where more than 3,000 singers from the UK, New Zealand and Scandinavia performed Handel’s Messiah and Verdi’s Requiem in Sydney’s Entertainment Centre.

During the 1980s, Sydney Philharmonia Choirs toured internationally for the first time, performing in Singapore, Japan and Italy. In 2002, it was the first Australian choir to perform in the BBC Proms in the Royal Albert Hall, singing Mahler’s Eighth Symphony conducted by Sir Simon Rattle. That success was repeated in 2010 with another tour to London to perform Mahler’s Eighth Symphony to celebrate the 90th anniversary. They have also performed at the 40th birthday celebrations of the Sydney Opera House, at the state memorial services of former Prime Ministers Gough Whitlam and Bob Hawke, and with the Rolling Stones. The Choirs perform works from the Baroque to world premieres of today, sacred and non-religious, from small ensemble works to works that involve literally hundreds of voices.

In 2019, Sydney Philharmonia Choirs became a resident company of the Sydney Opera House, having performed there every year since the opening in 1973. That year’s Messiah concert was recorded by the ABC for webcast and has been viewed over 1.3 million times.

In 2020, Sydney Philharmonia Choirs celebrated 100 years of singing. Despite the restrictions of the global Covid-19 pandemic which halted live performances, it pressed ahead with a commissioning project – 100 Minutes of New Australian Music – which featured composers Brett Dean, Elena Kats-Chernin, James Henry, Matthew Orlovich and Deborah Cheetham amongst others. In 2021, Sydney Philharmonia Choirs presented three live programs before Covid-19 restrictions began again. 2022 will see a full season of exciting live performances and a return to the newly refurbished Concert Hall of the Sydney Opera House and a tour to Christchurch, New Zealand.

Since that humble beginning in suburban Sydney over 100 years ago, members of Sydney Philharmonia Choirs continue to bring their passion and commitment to singing great music at the highest standard with some of the world’s finest conductors, soloists and orchestras.

In 2001 under the direction of the then music director Mats Nilsson, Sydney Philharmonia Choirs decided to launch its Assistant Chorus Master program to ensure the next generation of Australian choral leaders had the experience of preparing large symphonic repertoire alongside gaining an understanding of how an arts organisation works. Over its twenty-year period, we have seen some wonderful conductors work with the choir in this role and many have continued to work with the choir after their term as the ACM or have gone on to form their own choirs or to continue their careers overseas. It is a truly unique role in what is a truly unique organisation.

SPC is the choir of choice for all major events in Sydney and has been chosen to represent Australia on many public ceremonial occasions, such as: